Showing off his Milestone Card you'll see that yesterday Jake was 12 weeks old!

Hurrah! He's now smiling properly and grabbing things actively. He watches telly when bright colours or songs/ music come on and he's moving around a lot more (though he still HATES tummy time).

Jake is normally an absolute delight, but yesterday after his morning nap he became grumpy, clingy and grizzly.

He would not stop crying unless I was holding him, and even then by about 3pm that wasn't quite enough - he was whining even when held.

I couldn't understand how he could go from being happy and chirpy first thing that morning, to being so miserable?? 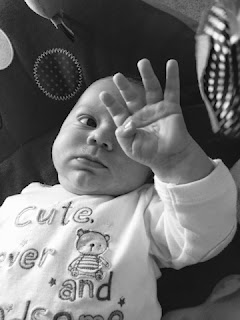 Then I realised - he was teething again. His cheeks were extra red (as you can see); he was dribbling and drooling loads; he was putting everything and anything in his mouth - fingers, fists, mummy's hair, toys - and his gums were a little redder at the bottom.

So - we tried some Teetha and it definitely eased things!

However, he was still clingy and trying to nuzzle into my skin. I took this as a sign and decided that we would do some skin-to-skin contact as this is always a good way to settle Jake, and is recommended by midwives and children centres. We both stripped down to our vests and snuggled in mummy and daddy's bed - it was the happiest and most calm he had been all day. Quickly, he fell asleep snuggling up to me and slept soundly for almost a full hour. Apart from the dead arm that I soon began to get, it was wonderful - listening to and feeling him breathe on me, his chest rising slightly as he was happy and content made me realise that all he really needed was his mummy... and I got to spend almost an hour just watching my beautiful boy.