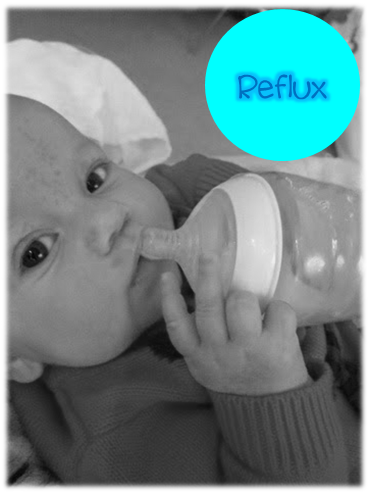 Those of you who follow Jake regularly will know that we've been battling tummy issues for the last month and a bit. Jake seems to have problems with his poop - 9 out of 10 poops are poonamis and we regularly have to strip his clothes and bed sheets on a morning.

After speaking with the doctor several times, finally they suggested we try treating it as a cow's milk allergy and they've been prescribed 'Milupa Pepti 1' milk - so far, we're seeing no changes in his poop habits.

However, this last week we've seen symptoms of what seems to be Reflux. It appears that after 2 weeks on the prescribed Milupa, Jake is not taking it well.

Last night he was sick in his bed and on us after his bed time bottle at 6:30pm.

What symptoms does he have?
What are we trying to do to prevent & combat this?
Lots of people have said 'just switch to the comfort milk' but whilst we're doing the 4 weeks to rule out the cow's milk allergy, on the prescribed Milupa, we can't do this. We also think it's the Milupa that has brought it on to begin with, as reflux was not an issue before.

I have just received my monthly subscription of PrimaBaby Magazine and they have a fantastic article on reflux in there. Their ideas for prevention are things that we already do, though. So, we're still at a loss. Poor kid - teething, runny bum, wonder weeks leap 4, changes in milk, reflux - I dunno how he's still smiling!

Does anyone else have any tips or ideas re: Reflux?