One of the first things my Midwife and then the Health Visitor spoke to me about was the importance of 'Tummy Time'.

In days gone by, babies were allowed to sleep on their sides/ fronts or backs without concern. Since further research into SIDS there has been a major move to promote babies sleeping on their backs. This huge increase in babies lying on their backs has led to an increase in the number of babies with 'Flat Head Syndrome' and a slower rate of physical development towards crawling and being able to hold their head steadily.

'Tummy Time' is important because:


From newborn, hubby and I have encouraged JD to lie on his tummy on us. Often, he would nap this way or we would lie him there and talk to him.

As new parents, we were nervous and over-careful around him, and it wasn't until 4 or 5 weeks that we attempted to actually put him on his tummy on the floor or playmat. Trying to get JD to do tummy time on the floor/ playmat without crying and screaming has been near impossible. He seems so upset and frustrated that we end up picking him up within a minute or two and soothing him.

I was beginning to fret that JD would never learn to roll over or crawl at this rate, because he wouldn't lie on his tummy and be happy about it. So, I set about reading around the subject. I found a very useful poster from ACPC.org here, which was encouraging.

I also found Boots' website and babycentre very useful. Some ideas they suggested were: 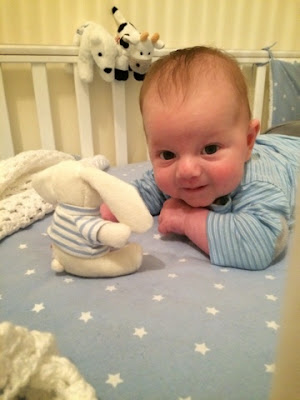 And there you have it! That final idea to do it after a nap is what worked for us. Now, when JD wakes from his nap, we leave him in his cot bed, we talk and chatter to him - making him laugh and smile. Then, we flip him over and try tummy time... it has been a success every time so far.