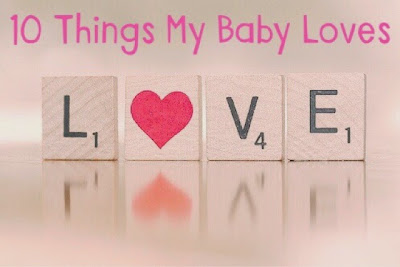 I adore my baby Jake. At very nearly 4 months he is simply wonderful.

One of the best things about being a mum is watching your baby change and develop. You begin to see their little personalities come out and it's fascinating to watch.

With each day, week and month, my little Jake shows he has his own tastes. Here are 10 things my baby loves:

1. Looking in mirrors: a Jake loves to look at himself in the mirror. You can see he's thinking 'it's another baby!' But he doesn't realise it's himself yet, I don't think. It's even funnier to see Jake look at me in the mirror, then look at me for real - he looks so confused!

2. Holding Fingers: he has a preference - he likes holding mummy's fingers best. He especially likes to do this when he is feeding, it is like his anchor. But he will hold other peoples' fingers too... And pull them towards his mouth!

3. Old Macdonald: Jake absolutely loves it when I sing Old Macdonald had a farm (e I e I o) lol. He also likes a few of the YouTube videos of it, but he really settles well and calms when I sing it to him. No idea why as I have a terrible voice!

4. Dancing: YMCA...Shake it off... Sexy and I know it... Ain't No Mountain High Enough - Jake loves it when music is playing and he (with mummy's help) is dancing along. He's a big fan of music.

5: Disney's Jungle Book, Pixar's Monsters University and Toy Story: as soon as these films come on the Sky Disney channel Jake is transfixed! He loves the songs and he bright colours.

6. Daddy's 'I'm gonna getch'ya!': best.game.ever! Jake's a big fan of daddy sneaking up on him and saying 'Daddy's gonna getch'ya!' Before munching on his belly - it makes him laugh and squeal with delight.

7. OBall: we had this in our first Sassy Bloom box. At first he wasn't that interested, but now he loves the OBall because he can grab it easily, lift it simply and try to chew it to death!

8: Blowing Raspberries: one of Jake's top skills is raspberry blowing, and he's getting really good at it!

9. Peekaboo!: another game that Jake loves. He likes it best when he's in his Woodland friends bouncer chair and you sneak up to him, look over the activity hanging bar and smile 'Peekaboo!'.

10. Being Naked: oddly enough, Jake much prefers his clothes off. You can tell that he finds it easier to manoeuvre and he especially likes being on his fleece blankets when clothe-less. Even better? Being in the bath!

What does your baby love?