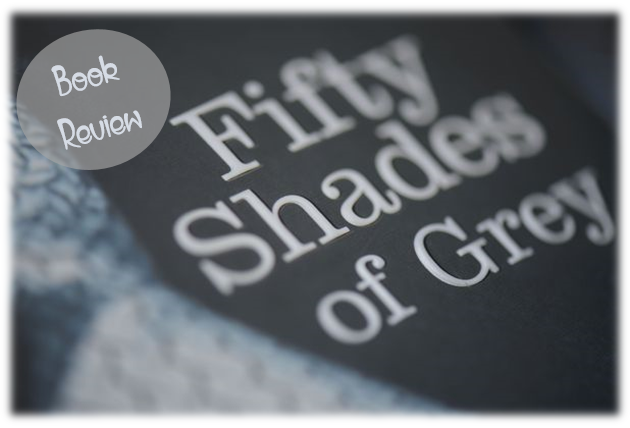 Let me be honest; this is the second time I have read 'Fifty Shades of Grey'. I first read it a few years ago when the book originally came out, after a colleague in my regular book club recommended it to us for a laugh. I read it quickly and with some amusement during the exam season, and did not pay it too much heed.

Since then, I decided to reread the book, after seeing that the movie was being released on DVD and that a new version of the story was being released in the form of the aptly titled 'Grey'. Since reading it the first time, I am now married and have a beautiful little boy. Context of reception is everything when reading a book, because every reader brings their own unique experience and emotional interaction to the story. This time, I have found myself feeling quite different about the story...

The Author & Blurb
'Fifty Shades of Grey' is written by E.L.James, a woman in her 40s who is a TV Executive based in London. James is a wife and a mother to 2 children. Her books have gone on to amount massive success and profits, after 'Fifty Shades of Grey' sales spiraled out of control a few years ago, in 2011. The book and the author herself have been described as liberators of women's sexuality and erotica fiction.

The blurb reads...
"When literature student Anastasia Steele goes to interview young entrepreneur Christian Grey, she encounters a man who is beautiful, brilliant, and intimidating. The unworldly, innocent Ana is startled to realize she wants this man and, despite his enigmatic reserve, finds she is desperate to get close to him. Unable to resist Ana’s quiet beauty, wit, and independent spirit, Grey admits he wants her, too—but on his own terms.
Shocked yet thrilled by Grey’s singular erotic tastes, Ana hesitates. For all the trappings of success—his multinational businesses, his vast wealth, his loving family—Grey is a man tormented by demons and consumed by the need to control. When the couple embarks on a daring, passionately physical affair, Ana discovers Christian Grey’s secrets and explores her own dark desires.This book is intended for mature audiences."

Reading the novel this time I have to admit that it is written with little professional style or quality; a lot of it smacks of teenage writing, the kind of transformation coursework I mark and oversee at A Level, as part of my job.

However, E.L.James has an ability to elicit sympathy in the protagonists. I wanted to find out what happened to Anastasia Steele and Christian Grey, and that lent the story a compelling, page-turning quality. I enjoyed it, and have continued on to book two; Fifty Shades Darker.

Ana and Christian are two characters who, in some way, shape or form, are battling a desire to be happier but don't feel worthy. I could identify with this on many levels, as I too have often felt I wasn't 'good enough' or I wouldn't be 'good enough' to do something. Women especially, I think, have a tendency to over analyse and to see the many pros and cons down the road, and allow this to eat away at us. In the book, Ana is able to overcome her sense of shame about her own body and learns to basque in Christian's admiration of her. Yes - there are sexual scenes that are explicit in detail and content, but not in a way that I found uncomfortable to read - and often they were page-turning in themselves.

The story between these two people, and their relationship is what keeps you engaged in the plot - and for me it did just that.

Is it a grand piece of literature in line with classics such as Jane Eyre and Pride and Prejudice? No.
Is it enjoyable and a fun read? For me, yes.