Being Back at Work: 4 Months on 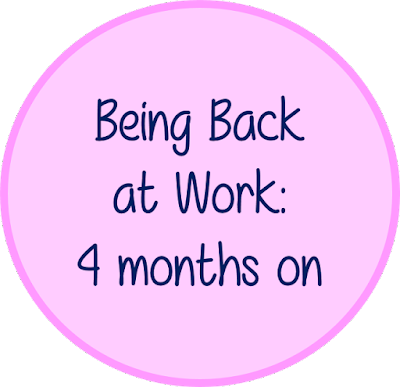 When I first went back to work in February, Jake had just turned 5 months old. Realistically, it was all we could afford for me to stay off. The pay more than halved a month before and we simply couldn't manage.

I was devastated. I was heart-broken. I felt like an awful human being and, quite frankly, a shit mother. I had always believed that a child should be with their parent/s and not be looked after by others. But that was in my ignorance of life as a wife and a mother. That was before I grew up.

Leaving Jake at nursery for those first few weeks, or leaving him each morning with my mum or Luke killed me. I cried. I cried everyday I went to work. I cried when I got home, because I had missed him and it felt like he hadn't even noticed I'd gone.

Yes. In a perfect world where we had loads of money and didn't need for me to go to work, I would love to be at home with my son. Yes, I want to be the one giving him breakfast lunch and dinner every single day. But, my reality is different and actually - Jake loves it!

Jake adores nursery - he has made some lovely little friends there and he loves the staff he has; they always comment on how happy and easy going he is and they can see he's cheeky and funny, just like we can. Nursery is like getting to go to sensory class and music class every day. He loves going into the garden area and he plays in the sand pit everyday - it's his favourite. They feed him all new and different freshly cooked foods each day, which means it doesn't matter too much what he has in the evening for dinner. They follow an early years curriculum and set smart targets each month which they work on together; for July, Jake's was meant to be able to pull himself up on furniture, but he did it yesterday - so they are on to the next.

When I'm at work and Jake isn't at nursery he is with Daddy or Nanny. I love this because it means he's getting to spend time alone with Daddy, and that's important. He's also getting one on one time with Nanny and they have a lovely bond now; he adores her and she adores him.

Now, I don't feel bad going to work. That money means I can treat Jake to toys, clothes and save up for his future. It means that we have the bills paid and he gets to go to nursery 3 mornings a week - which he really enjoys. He is so sociable and engaging now, that people will often comment on it. I believe that's because he mixes with others regularly at nursery.

I didn't ever think that I would feel OK about being a full time working mum. But actually, with good routines and by making sure you make the most of the time off you have - it works.

Good luck to those of you who are due to go back to work; count yourselves lucky that you've had time with your babies (often a lot more than the 5 months I had). I hope the transition goes well and you all get through it.